The NYT does not want Gina Haspel to head the CIA and to that end allowed Fatima Boudchar to write an Op-Ed to bash her.

Boudchar described herself as a simple woman “from a small town in Morocco” . What the New York Times and Boudchar do not tell you is that she is the wife of terrorist Abdelhakim Belhaj, who is wanted by numerous countries for his terroristic acts and is the subject of an Interpol alert. She also forgot to mention that she was arrested and detained by the CIA in 2004. It seems to me that these facts are relevant. The NYT has become the paper of choice for terrorists, I guess.

Here is a picture of the terrorist Belhaj with someone you might recognize: 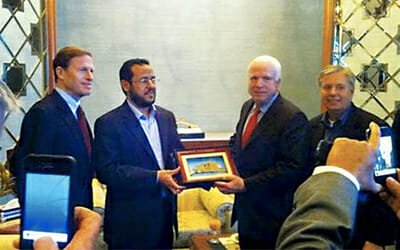 The New York Times seems destined to sink Gina Haspel’s chances of becoming CIA director — even if it means running op-eds by the wife of a radical Islamist.

The Gray Lady decided to give one of her pages on Wednesday to Fatima Boudchar, who was jailed by the CIA in 2004. To hear Boudchar tell it, you’d think the U.S. government abducted and tortured a poor pregnant woman in a Bangkok secret prison simply because of her tangential relationship with an anti-Qaddafi freedom fighter.

In reality, Boudchar’s professed ignorance of being a simple woman “from a small town in Morocco” who “hardly thought about the United States” stands in opposition to her marriage to Abdelhakim Belhaj, an Islamist military leader who once fought for the Taliban and has alleged ties with al-Qaeda leaders.

Of course, Belhaj’s name is nowhere to be found in Boudchar’s column — surprisingly (or not, depending on your level of cynicism) The New York Times’ editors didn’t find it necessary to include this fact either.

Boudchar said she underwent brutal torture in the hands of the CIA, such as being assaulted in the stomach despite being halfway through a pregnancy. Her stay with the CIA was brief, however, and she seemed to undergo the most brutality in the hands of the Libyan government.

So the moral of this story is if your husband is a well-known terrorist wanted in multiple countries and you want to bash a Trump nominee, make sure you contact the New York Times first.