A huge donor, who contributed heavily to Bill Clinton and to Hillary in her two embarrassing losses. He then received an $8 billion dollar contract to supply food and other necessities to our servicemen in Afghanistan, when Hillary was the Secretary of State.

The company ANHAM Food included top Democrat Terry McCauliffe and his wife on its board of directors.

Abul Huda Farouki, 75, of McLean, Virginia; his brother Mazen Farouki, 73, of Boyce, Virginia; and Salah Maarouf, 71, of Fairfax, Virginia, were each charged in an indictment filed in the District of Columbia with two counts of major fraud, one count of conspiracy to violate the restrictions on doing business with Iran, four counts of substantive violations of those restrictions, and one count of conspiracy to commit international money laundering. 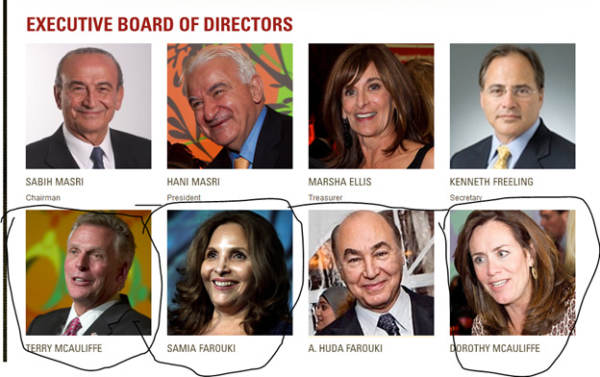 “Three men were charged in an indictment returned Nov. 27 for their roles in a scheme to defraud U.S. Military contracts in Afghanistan, engaging in illegal commerce in Iran, and laundering money internationally. Their conduct was in connection to two multi-million dollar contracts to provide supplies and logistical support to U.S. troops in Afghanistan.,” according to a Justice Department statementfrom last week.

One of the men, Abul Huda Farouki, was the chief executive officer of Anham FZCO, a defense contractor that secured an $8 billion contract from the Pentagon to supply food and equipment to U.S. in 2011 while Clinton was Secretary of State. The company did so by lying.

“The indictment alleges that the defendants schemed to defraud the Department of Defense in connection with the SPV-A contract by submitting bids that contained knowingly false estimates of the completion dates for the warehouses and by providing the government with misleading photographs intended to convey that Anham’s progress on the warehouses was further along than it actually was,” according to the DOJ statement.