Do you remember the 2016 Democratic National Convention? I do. And do you remember what they did to secure their convention hall from Bernie protesters?

They built a huge wall around the convention center to keep the undesirables (Bernie supporters) out. But, I thought walls were ineffective and don’t work. Nancy, Chuck. Is that who you are as a party? If they Democratic party ever implodes, hypocrites could become extinct. They have walls around their homes to keep them safe but no wall for you.

They even built a huge wall around their convention. They thought it was a good investment even though it was only for a week. At least Trump’s is permanent.

The Democratic National Committee embraced the idea of border protection in 2016 — as long as that border was around the building housing its national convention.

Protesters against the Democratic Party’s nomination of Hillary Clinton were met with tall fencing around the perimeter of the Wells Fargo Center in Philadelphia during July 2016. (RELATED: Trump Stands Up To Chuck And Nancy)

Many of the protesters who gathered outside of the barrier were supporters of Independent Vermont Sen. Bernie Sanders.

Some Democrats, like Brady Brassfield, told WJLA they felt “cheated” after seeing the extensive security constructed by the DNC.

Other protesters, like Sanders supporter Kyle Fitzsimmons, said she understood the fencing.

“They need to feel safe whether I agree with them or not,” she said.

I guess only the elite are entitled to fences and us peons are on our own. 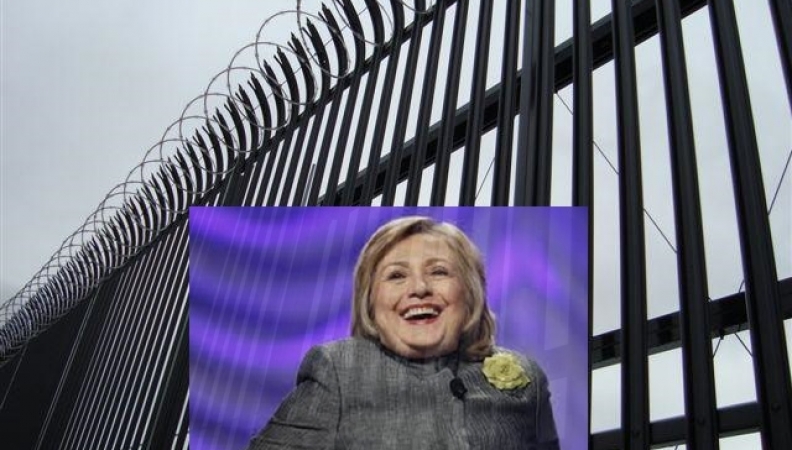 Chants of “hell no, DNC, we won’t vote for Hillary” broke out among the crowd holding sings that demonstrated support for Senator Bernie Sanders and criticized the Democratic party and their presumed presidential nominee.

Holding a sign with the word oligarchy crossed out on it, Brady Brassfield stood right in front of the perimeter fence, showing the message to delegates as they filed by on their way to the convention.

“I feel cheated, definitely,” Brassfield said when asked about the fence-wall he was standing in front of.

“They don’t want to hear what we want to say or see what we have out here, really,” Brassfield said.