We have been told that there is no evidence that any foreign power had breached Hillary’s illegal server but that turns out to be a lie.

Fox News has obtained documents from the House to be used to question IG Horowitz with next week and not only does it show that her server was breached but that at least one document with the highest ranking of “SECRET” was stolen by a foreign actor and the document specifically stated that if the document was stolen it would badly damage national security. Peter Strzok is also involved as he was informed of irregularities in the metadata suggesting that the system had been breached and he did nothing about it.

“Documents provided to the Committees show foreign actors obtained access to some of Mrs. Clinton’s emails — including at least one email classified \’Secret,\'” the memo says, adding that foreign actors also accessed the private accounts of some Clinton staffers.

The memo does not say who the foreign actors are, or what material was obtained, but it notes that secret information is defined as information that, if disclosed, could “reasonably be expected to cause serious damage to the national security.”

The committees say that no one appears to have been held accountable either criminally or administratively.

Relatedly, Fox News has obtained a May 2016 email from FBI investigator Peter Strzok — who also is criticized in the House memo for his anti-Trump texts with colleague Lisa Page. The email says that “we know foreign actors obtained access” to some Clinton emails, including at least one “secret” message “via compromises of the private email accounts” of Clinton staffers. 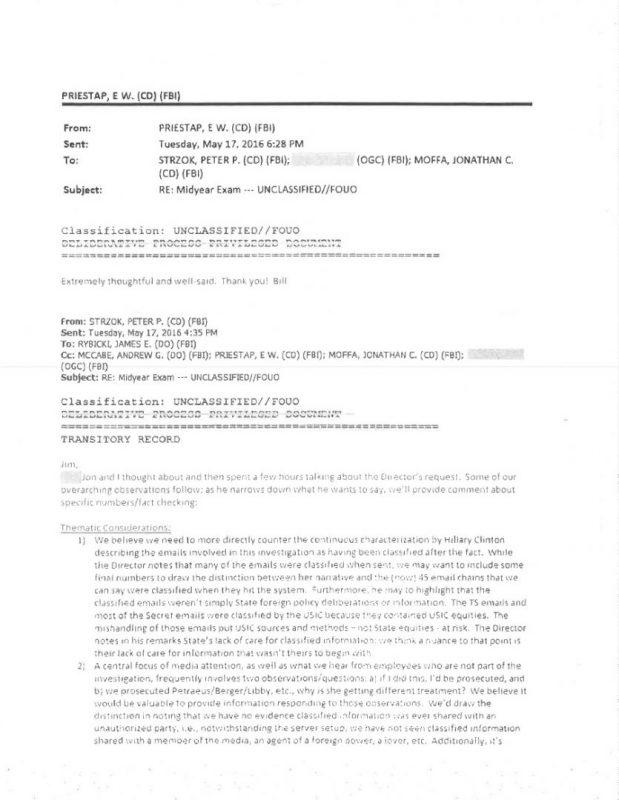 This is a major game changer and should lead to Espionage ACT charges against Hillary since there is no longer any doubt that sensitive documents were stolen from her illegal server.