Recently, Cenk Uygur of The Young Turks tried taking on Ben Shapiro via a debate at Politicon and was handed his a*s on a silver platter by Shapiro himself. During this debate a lot of time was given to tax policies, at several levels. At one point, Cenk Uygur responded to Shapiro’s claim that tax revenue is at an all time high…

So when you say tax revenue is at its highest point, now you know that that is misleading because everything economically is at its highest point, meaning that we have a lot more people in the country than we did in the 1950s and 1960s, so hence we are collecting more overall taxes. But, the reality is, as a percentage it is clearly down, the top tax bracket now is around 39%, it used to be at 91%, that’s inarguable right? … To say that it [tax revenue] is at record collection is misleading.

Well, them boys over at The Daily Wire decided to check out some of the facts… including this one…

Cenk is right that measuring things in terms of total dollars doesn’t mean much, if for no other reason than population growth alone would keep resulting in record-high tax collection. But the rationale behind Cenk’s argument, that contemporary tax receipts must be lower in population-adjusted, inflation-adjusted, and growth-adjusted terms simply because the rates that exist in the law today are lower than they were before is itself very flawed, and actually flat-out incorrect. There is a very simple way to measure how much of our national output the Federal government is collecting, and has collected historically in this country — by looking at Federal tax receipts as a percentage of Gross Domestic Product. 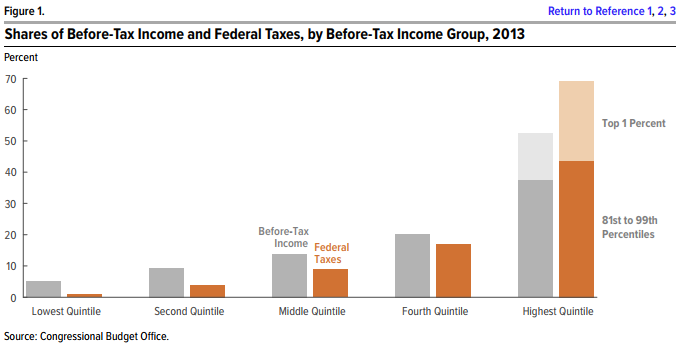 The average for 1950-2016 was about 16.9% of GDP collected as Federal taxes, meaning we are currently collecting slightly more than we have on average since 1950. The primary driver of spikes and drops in the percentage over the years has been cyclical changes in the health of the economy. When the economy is booming it tends to go higher, and vice versa.

People are often surprised to hear this, since they’ve assumed that because marginal income tax rates were higher on everyone up and down the income spectrum in the 1950s/1960s, that surely taxes must have taken a larger share of our national income than they do today. The reason why this isn’t the case, however, is because it was easier to avoid paying taxes back in the 1950s, especially for rich people. Tax shelters, loopholes, deductions, tax-free securities, and so forth made the tax code the equivalent of Swiss cheese.