I used to enjoy Snopes years ago, back when they mainly focused on urban legends, ghost stories, and things like that. Unfortunately, they’ve become another tool of the Left’s propaganda machine.

While they claim to be unbiased it seems that sometimes someone in their system squeezes in a little jab toward President Donald Trump, which I found to be suspicious. I decided to do a little digging to see what their stance is so far and I’ve not come up with much in the way of proof though a few websites and media outlets have made attempts.

Kalev Leetaru wrote a piece for Forbes in this regard after a friend pointed him to a DailyMail article. He contacted David Mikkelson, the founder of Snopes, to get to the bottom of what he had read. To his surprise, Mikkelson responded and was willing to communicate but that’s when it started going downhill:

In short, when someone attempted to fact check the fact checker, the response was the equivalent of “it’s secret.”

Later, Leetaru put some thought into it and wanted to know more about the criteria for “fact checkers”, and in it he noted:

When I asked for comment on the specific detailed criteria Snopes uses to screen its applicants and decide who to hire as a fact checker, surprisingly David demurred, saying only that the site looks for applicants across all fields and skills. He specifically did not provide any detail of any kind regarding the screening process and how Snopes evaluates potential hires. David also did not respond to further emails asking whether, as part of the screening process, Snopes has applicants fact check a set of articles to evaluate their reasoning and research skills and to gain insight into their thinking process.

And I entirely understand his stance. I happened upon an article myself which is one of it’s “fact checked” articles. The question: Donald Trump Received an Ellis Island Award in 1986?

Donald Trump has long been noted for his giving nature to minorities and the disenfranchised. The article does, in fact, state that the question is TRUE, and accurate. He did receive the Ellis Island Award along with many other prominent figures but it’s the end of the article that caught my attention. It seems like a petty jab that serves no merit or purpose to the article itself:

Trump was one of 80 individuals to receive the Ellis Island Medal of Honor in 1986, the first year that the National Ethnic Coalition of Organizations handed out the award. However, the fact that Donald Trump received the award and posed for a photograph says little about his motivations or whether or not he has racist tendencies, only that he received an award and participated in a ceremony meant to honor him (and others).

Democratic presidential candidate Hillary Clinton was similarly honored with the Ellis Island Medal of Honor in 1999.

So sure, it may be a “fact” that 80 others received that award the same year but so what? Muhammad Ali and Rosa Parks (as Snopes points out) did as well… by the Snopes logic, that makes their being recipients of this same award marginalized in a sense, don’t you think?

And finally… the mention of Hillary Clinton. Really, Snopes? REALLY?! WHY?! She has NOTHING to do with the FACT that he received this award.

Snopes, I DARE YOU TO CLAIM UNBIASED BEHAVIOR AFTER THIS ARTICLE!

I decided to check Internet Archive’s “Wayback Machine” for a link to this article and discovered that I cannot access it. It seems that they have at least this URL (maybe the whole website) set to not allow it’s crawlers to access the site. Why? Maybe they want to hide crap like this…

Just in case, here’s a screenshot of the article entirely unedited. 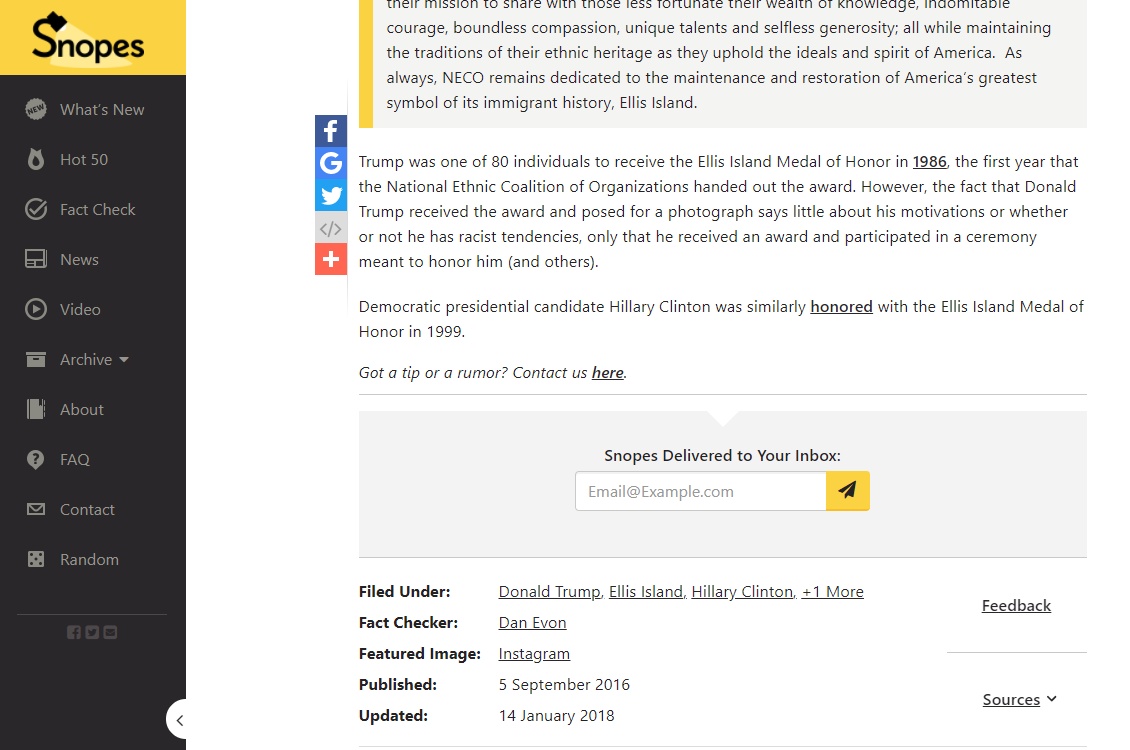 Update: Here’s a Google cache version just in case though I freely admit to not knowing exactly how their system works, if it can be easily changed/updated.