CNN contributor Ana Navarro shared a photo of Cleveland Cavaliers star LeBron James with an anti-Trump shirt with some rather strong language on it. The phrase “U SON OF A B***H” with Trump’s name above it was clearly visible.

The problem with it is, besides the obvious, is that the photo is entirely fake.

When she shared it, she added the words “Freedom of expression Makes America Great. Whether u approve or not, we’re free to wear this. Could get u jailed or killed in some places.” 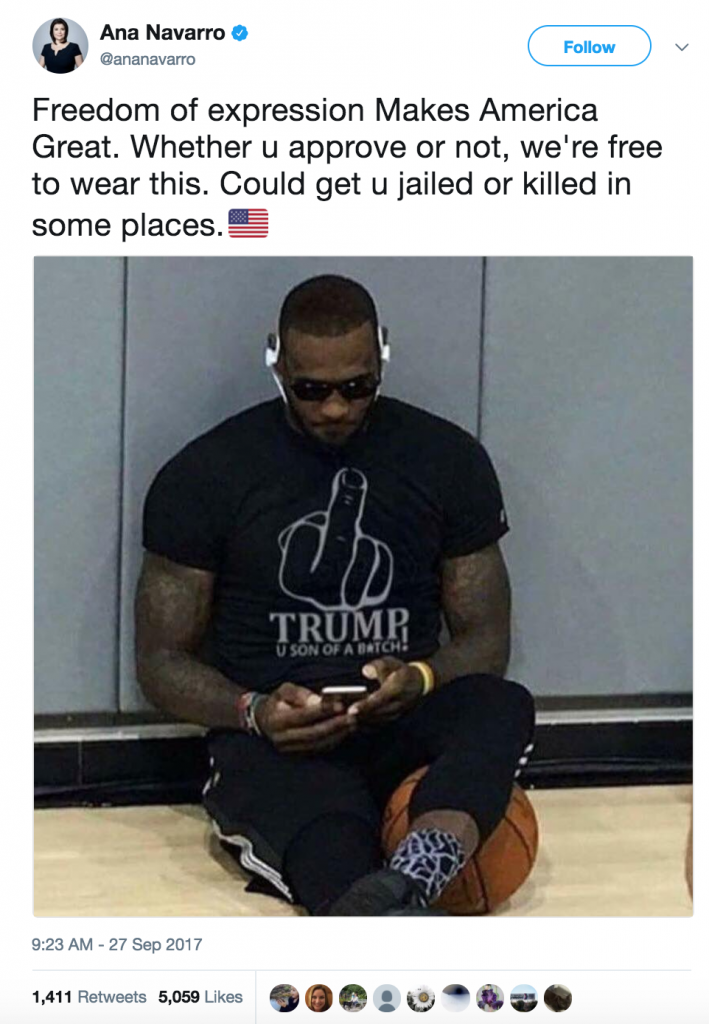 I guess given his “stance” on the NFL “protest” lately, one might not be surprised if this were real. Even still… it’s not real.

So it’s clearly photoshopped. Here’s another shot of him wearing the same exact thing except with another shirt…

While it may seem a little silly to share this bit of news I just believe that someone who considers themselves a journalist (mainstream, most of all) should have done a bit more due diligence on this.

I guess you would need to consider the odds of him wearing nearly the same exact thing (all except the shirt), same headphones, same pose, same earbuds, at two entirely different times.

It would be one thing for her to acknowledge it was fake but she has since deleted the Tweet in question.

Plus, it’s CNN.  With their “nothing burger” Russia story, and now trying ever-so-hard to push the narrative that Trump is somehow a racist, seemingly in the hopes of regaining some of their lost audience… I guess I shouldn’t be too surprised, but I am.

Is this just an honest mistake? Maybe… but again it’s just CNN being CNN to me.