A member of the Religion of Peace has decided to sue Little Caesars Pizza for $100,000,000 (yup) after he claims they served him pepperoni made with pork, a food prohibited by their religious law.

Mohamad Bazzi of Dearborn, Mich. ordered a pizza called Halal twice from his local store, with the boxes being labeled “halal” except… oh no! the pizzas were covered with regular pepperoni.

Majed Moughni, Bazzi’s attorney, says that their client RUSHED to file the lawsuit.

“It’s really upsetting,” Moughni said. “My clients want the public to know. Especially during Ramadan, it would be a travesty if Muslims … in Dearborn bought pizza from Little Caesars and discovered they were eating pork.”

As written for 11Alive:

A spokeswoman for Little Caesars did not immediately return messages seeking comment. 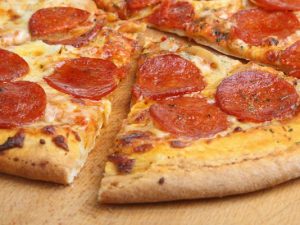 The lawsuit, filed in Wayne County Circuit Court, says the first incident happened March 20. Bazzi and his wife were midway through eating a pizza he had brought home from the shop when they realized it had pork pepperoni.

Bazzi knew it was pork because he used to work in a pizza place and knows the different types of pepperoni, Moughni said. He also said Bazzi’s wife could tell because she is a Catholic convert to Islam who grew up eating pork.

They “became sick to their stomach,” according to the lawsuit. Three days later, they filed a police report.

The second incident happened May 24, the day before the lawsuit was filed.

When Bazzi confronted the shop manager, according to the lawsuit, she told him at one point that Bazzi had asked an employee to put a halal sticker on the pizza box, a claim Moughni disputes. Bazzi secretly recorded the conversation.

Halal is the Muslim equivalent of Judaism’s kosher and requires that meat be prepared according to Islamic guidelines, such as reciting a prayer while the animal is cut.

“There’s different schools of Islamic law that allows for the eating of chicken and beef, but there is no such thing as halal pork. The pork itself is forbidden,” Moughni said.