Senate Minority Leader Chuck “Road Block” Schumer has only one tool in his toolbox. That tool is “obstruction.” The Senator has painted himself into a corner by taking the position that he cannot and will not work with the Trump administration. He has left himself no wiggle room and no way out. He would pull the national house down around his ears if that is what it takes to restore himself to power. But I digress. Watch the video and draw your won conclusions. 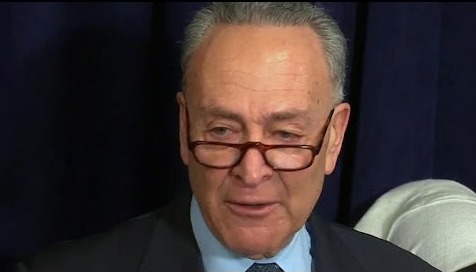 As Written By Jazz Shaw for Hot Air:

I’m old enough to remember when the Republicans were in the minority in Congress and the Democrats held the White House as well. At that time, the GOP was popularly referred to as the Party of No, and some outlets like the Huffington Post were not only applying that tag to them, but calling for the party to be abolished as a result of it. My, what a difference eight years can make, eh? The worm has turned and now the Democrats are on the less enviable side of the equation. But the key difference now is that being the Party of No is suddenly cool. And the leader of that movement is none other than Senate Minority Leader Chuck Schumer.

The latest and best (or “worst” if you prefer) example of this comes in the debate over when to replace former FBI Director James Comey and who should fill that role. The “who” portion of the question is up to the President for now, but Schumer sounds like he’s made up his mind about when. During an interview with Jake Tapper yesterday, Senator Schumer sounded for all the world as if he’s ready to stonewall any nomination unless there is first a special prosecutor appointed in the Russia investigation. (CNN)

Senate Minority Leader Chuck Schumer said Sunday that the Senate should refuse to confirm a new FBI director until the Department of Justice appoints a special counsel to lead a probe into allegations of collusion between the Trump campaign and Russia.

“I think there are a lot of Democrats who feel that way,” Schumer said on CNN’s “State of the Union.” “We’ll have to discuss it as a caucus, but I would support that move.”

Here’s the video of the interview. If you want to skip ahead to the applicable question and………