Liberal media outlets keep calling everyone who doesn’t matter THIS OF THE YEAR or THAT OF THE YEAR! All the while ignoring the great job President Donald Trump is doing in restoring our nation to its rightful glory.

So when it comes to giving awards and titles away, it should go to the hardworking Americans who roll up their sleeves and get their hands dirty — as well as those who know Donald Trump is our President.

With that, let’s talk about Frank Giaccio.

You remember Frank Giaccio? He’s the 10-year-old boy who had the courage to write a letter to our POTUS, giving him the respect he deserves and offering to cut the grass of the White House lawn for the leader of the free world.

“It would be my honor to mow the White House lawn some weekend for you,” Frank wrote. “Even though I’m only ten, I would like to show the nation what young people like me are ready for.

“Here’s a list of what I have and you are free to pick what ever you want: power mower, push mower, and weed whacker,” the wise-beyond-his-years entrepreneur wrote. “I can bring extra fuel for the power mower and charged batteries for the weed whacker.” 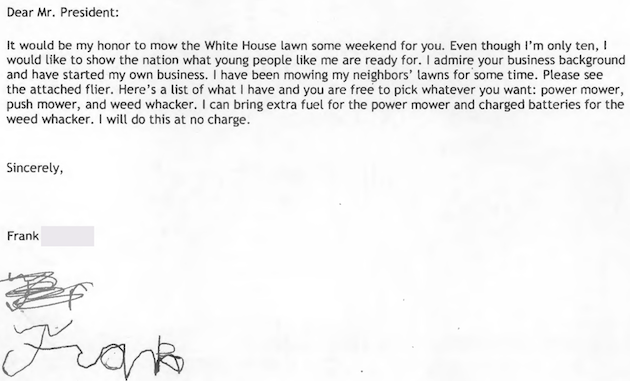 And the kid only wanted his typical $8 fee — his dad convinced him to do it for free. Either way… Frank, my man… $8? Come on… you’re an American. You better be charging more than that!

Finally… the day came. Frank entered the grounds of the White House totally dressed for the job. Gloves, protective glasses, and even ear plugs – little guy was ready!

The young man wanted to work, and work he did. Even when Donald Trump came out to greet him, he kept right on working! His efforts earned high marks. Trump praised Frank as the “future of the country.”

Later, in the Oval Office, talking with President Trump, Frank revealed he intends to enlist in the Navy someday.

“Frank embodies the enterprising and ambitious spirit of America and it was our honor to have him at the White House this year,” Sarah Sanders said. “The Rose Garden has never looked better!”