Alt-left Tool and Teen Vogue columnist, Emily Lindin, went on a bit of a rant recently on Twitter, proclaiming to not care of false sexual allegations rendered against innocent men hurt their reputations because of “the patriarchy” or some such nonsense.

She wrote “Here’s an unpopular opinion: I’m actually not at all concerned about innocent men losing their jobs over false sexual assault/harassment allegations. First common false allegations VERY rarely happen, so even bringing it up borders on a derailment tactic. It’s a microscopic risk in comparison to the issue at hand (worldwide, systemic oppression of half the population). And more importantly: The benefit of all of us getting to finally tell the truth + the impact on victims FAR outweigh the loss of any one man’s reputation.” 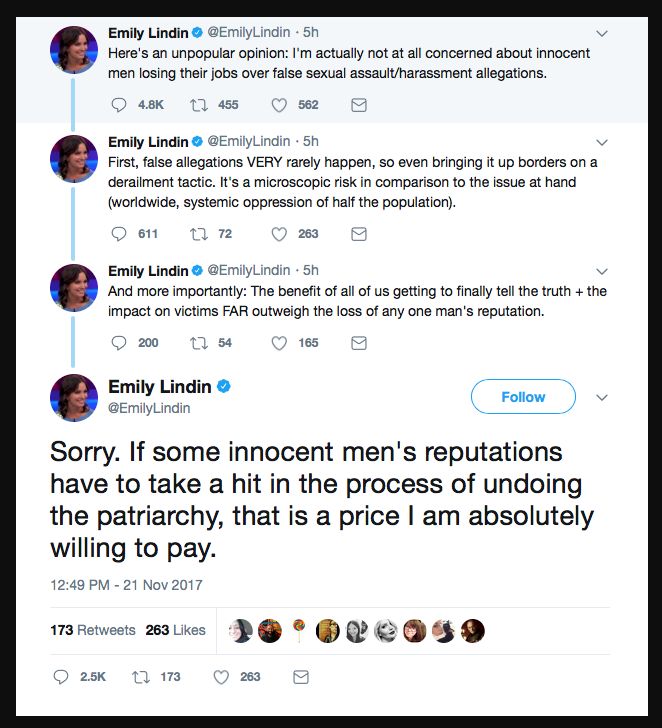 Any normal, rational, and sane person would agree that this is utter nonsense that only someone with a high level of privilege only would stoop to.

Emily Zanotti over at The Daily Wire put it beautifully: “Basically, all men are members of an oppressive group, therefore they are all guilty of some form of sexual impropriety or gender-based discrimination, so it only follows that, if a few of them are dragged under by the wave of accusations now rolling ashore on movie sets and in newsrooms, they’re just a handful fewer men we ladies will eventually have to trod under our stilettos anyway.”

“Ironically, Lindin is the head of something called the “UnSlut” project which claims to facilitate the end of “sexual bullying” and promote “gender equality.” Although Lindin’s project claims that it involves “all genders,” it’s not clear whether any men involved in the project were aware they would have to self-immolate in order to help Lindin achieve her goals.”

Jake Tapper caught wind of it and decided to fire back at Emily as well as a naysayer who tried taking up for the wayward columnist’s point of view.

I’m sure they see it as “mansplaining” but whatever.

I’m guessing you didn’t get a good grade for your 7th grade book report on To Kill A Mockingbird. https://t.co/3M5Af7jIqn 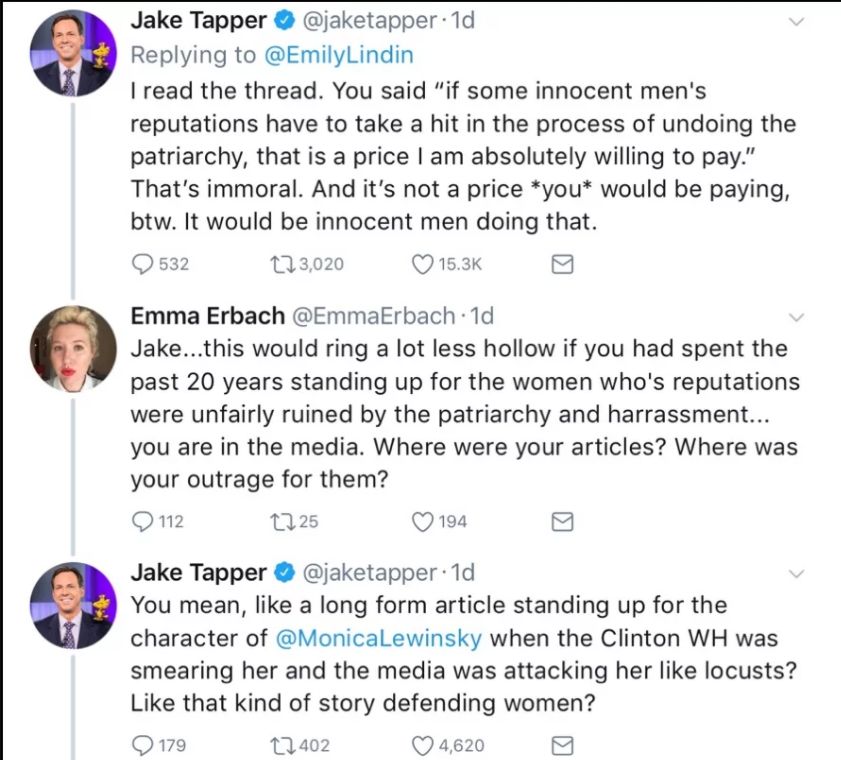